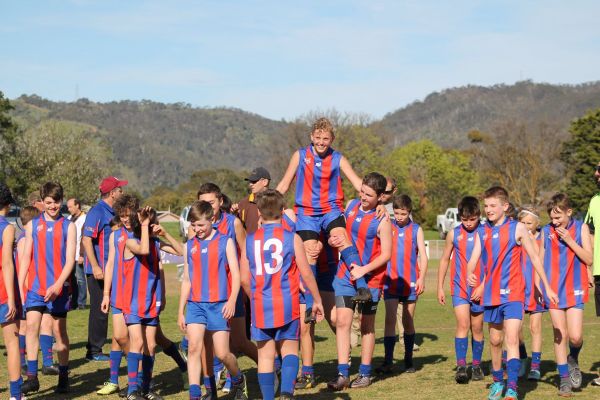 Many people would not know that the Hope Valley Football Club in various forms & partnerships is one of the oldest football clubs in the Northern Areas of Adelaide and Metropolitan Adelaide in general.

Starting way back in 1906 in Red & Black. It was not until the 1930’s that the Hope Valley Football Club found its way to the great Red & Blue.

Our Home Ground is the picturesque Hope Valley Oval. Sit on the club balcony and watch the kids play with the rolling Adelaide hills as a backdrop.

New players are always welcome regardless of age, experience or ability. For details on how to get in touch visit our Contact Details

Hope Valley’s greatest era in the 1930s coincided to a large extent with a temporary merger with the club’s arch rival, Highbury. The merger took place in 1931, after Hope Valley had won the 1930 North Eastern Hills Football Association premiership as a solo entity. The merged club, known as Hope Valley and Highbury United, then proceeded to add further flags in 1931 and 1932. During world war two, with playing stocks depleted, Hope Valley forged a partnership with Tea Tree Gully, and in 1945 the alliance was joined by players from the Houghton and Paracombe Football Clubs. Competing in the Torrens Valley Football League this combination proved too strong for all its rivals as it cruised to the 1945 premiership.

The Demons commenced in the South Australian Amateur Football League in 1987. Competing in A6 Grade they claimed a premiership at the first time of asking, thereby earning promotion to A5 Grade. A second successive promotion followed in 1988, but this time the Demons had to be satisfied with finishing runners-up to Adelaide Lutheran.

The next half a dozen seasons saw the club’s seniors regularly contesting the finals and in 1994 they achieved promotion as premiers, defeating Old Ignatians in the grand final by 19 points, 14.11 (95) to 11.10 (76).

The 2008 season saw the Demons in Division Six, and performing strongly at both senior and reserves level. Both grades ultimately played off for the premiership, with the reserves capping their unbeaten season with a 13.9 (87) to 7.8 (50) defeat of Hectorville and the seniors falling short by a single straight kick against Westminster Old Scholars.

Recent seasons have seen the Demons competing in Division Four. They contested the finals in 2014 but two seasons later succumbed to relegation to Division Five where they marked time over the course of a 2017 season which produced 7 wins from 18 matches and saw them finish in sixth place on the ten team premiership ladder. A year later they managed 5 wins and a draw to drop down the ladder to seventh.

2019 for the club was a great year with both the A and C grade taking out the premiership, seeing 2020 a new challenge in a higher grade.